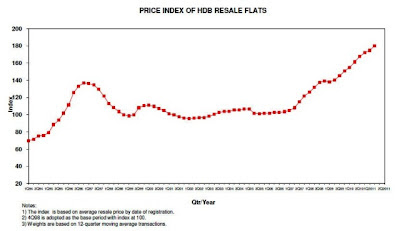 Chuan-Jin must be commended for coming out and trying to explain some of the government's rationale for doing things the way they do. But his comments are again proof that the government cannot think outside the box they have prescribed for themselves.


"But even with the grant, it’s striking to note that on a stated income of around $1,850, Anak Abu chose to buy a four room flat (not a smaller one), at a Sale of Balance Flat exercise (and not a mainstream BTO flat), in a mature estate (as opposed to a non-nature estate), near the top floor (rather than lower down), and next to the town centre (and not further away)." Chuan-Jin

A 4-room flat has only 3 rooms. If the family mentioned by Chuan-Jin has two children (especially if one is a boy and the other a girl), they will each need a room. Professor Phua Kai Hong recently said in relation to Eldershield, "People are calling our hospitals a First World sector, but that our long-term care is Third World standard." The first-world-third world analogy is also apt for our public housing. 2-room flats are still being dished out as an option for families. 2-room flats only have one bedroom. One bedroom for a family of four?

By the time Anak Abu has finished paying for his flat, he would be at least in his mid-sixties and he would probably not have that many years more to live. If he rents out the room in his flat, how easy would it be to live with strangers? As it is, we find it very difficult to live with even our own families. If Anak Abu had rented his flat instead of buying, he would have more in his CPF but he would barely have $300 from his '$1850' monthly income - and I wonder how he'll make ends meet?


"HDB needs to price the flats with reference to their prevailing market value." Chuan-Jin

It would have been better if Chuan-Jin would have just acknowledged that yes, there are inequities (for there really are and perhaps will always be) and that the government is trying to minimise these inequities, without coming out to justify that the HDB flats are not so out of reach.

Sir, most of HDB's policies are fair and acceptable. The one thing that is constantly frustrating is the fact that new flats are priced with "the prevailing market conditions" factored in. Explanations and so-called rationale for this have superficial and unsatisfactory.

The resale market is a free market where supply and demand determines prices. New flats sold by HDB do not operate within this market. There are eligibility criteria which limits demand. Yet the prices of new flats are going higher and higher because of "prevailing market conditions". It has been observed that new flats prices track the resale price index.

In the resale market, there is no income ceiling and buyers with high income can participate. Those who have qualified to buy a new flat directly from HDB obviously do not have this income level, yet with prices pegged to the prevailing conditions of the larger market, they are expected to pay more because of the deeper pockets of those who can't even participate in this reserved market.

I know there are grants and subsidies, and these are much appreciated. But that is besides the point, because this particular issue isn't about affordability. It's a simple question: Is it right to peg the prices of new flats to prevailing market conditions? Does it even make sense?
April 27, 2012 at 10:29 AM

tongue-in-chick said…
The real problem is that this starts a vicious cycle that keeps pushing the prices up. The prevailing mentality of Singaporeans is that flats appreciate in price over time, at least in the first few decades - no statistics beyond that for now. Unless desperate, nobody is willing to sell their flat at a loss. In other words, resale flats will always be priced above HDB's new flat prices. This in turn pushes up the market-valued prices of new flats. Which then pushes up the resale market prices. This leads to constant positive feedback between the new HDB flat prices and the resale market prices. Inevitably, prices will reach an unsustainable level, and the bubble will burst. The individual can say I don't care, and make an investment profit out of the situation - before the crash arrives. The government will only stand to gain in monetary terms, with the escalating prices of new flats, since it doesn't hold that many unsold units at any point. But should it let this happen? Or should it admit its erroneous policy, and change the way it pegs prices to market value? As the government, should it not be the one setting the prices, rather than blindly following the market? It does not have to be a drastic change. If they maintained or slightly reduced the prices of new flats, they won't devalue the investments of current home owners, but still keep the prices at a sustainable level.
April 27, 2012 at 2:34 PM

Gary said…
The way this newbie minister tackles issues raised is symbolic of the way his party typically argues its views - by simply taking hypothetical arguments devoid of any recognition of ground reality. The entire intent is to win an argument - NOT SOLVE AN ISSUE RAISED. That is why they are becoming more and more distant and detached from the electorate. There is but one solution to this 'disease' eating up the govt - to put it squarely in the defensive.

The so-called 'open market mechanism' has been so violently abused and bastardized by the ministers who surprisingly have not learned from the lesson of sacked Ma Bow Tan's 'affordable pricing'. Affordable to whom?

HDB means public housing, yet the open market is used to justify the price of new HDB flats. This is exactly like using the price of durians to sell you rambutan! Only, the demented mentality of the HDB and its ministers would fail to see the incongruency of such a logic. This Tan (another Tan!) an ex-commando (?) must have undergone the water torture once too many time during his SA career going by his water-logged brain responses!
April 27, 2012 at 6:14 PM