YPAP call for fairer fares and past precedence 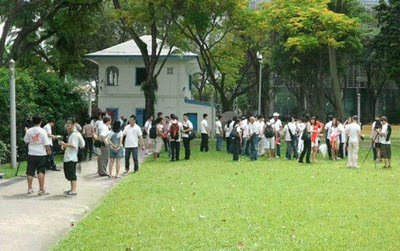 If past precedence is an indicator, this would be the response from the public transport operators to YPAP's call for 'fairer fares':

Source: Renewed calls for public transport subsidies for the disabled

(For the record, the public transport operators have been "considering" for about 2 years if people with disabilities should have concessionary travel.)

--
If the matter for fairer fares for polytechnic students goes to the Public Transport Council, the Council would say:

Source: PTC responds to our petition

If the same matter goes before the Transport Minister, he would say:


“I’d be very slow in stipulating (to operators) how best to run the concession policy.”

--
At the Parliamentary sitting of 22 November 2011, Transport Minister Lui Tucjk Yew in response to MP Baey Yam Keng said that the purview of public transport prices mainly resided with the Public Transport Operators (PTO), and not with the Government.

Unhappy with the PTO's non-response to the disparity, Young PAP took to Speakers' Corner this morning to campaign for fairer fares, which was supported by about 40 participants.

Writing about their campaign for 'fairer fares' on their Facebook YPAP says:


"But will the PTOs’ respond? Can more be done if they do not respond or respond negatively? Whatever the outcome, the YP etched a milestone in supporting citizen activism today and will continue to do more."