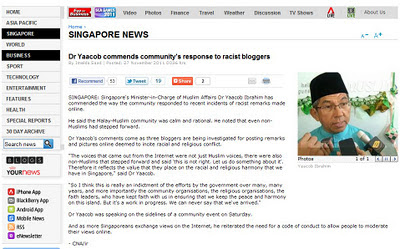 The CNA article 'Dr Yaacob commends community's response to racist bloggers', cast all 3 persons who seem to have made disparaging remarks about Islam as 'bloggers'. Where all 3 actually bloggers? None of the people who are alleged to have made the offensive comments, did it on their own or group blog. The comments and/or pictures were from their Facebook.

If anypne who posts something on Facebook is considered a blogger, then a large portion of Singapore (including some Ministers) should be identified as bloggers as well.

Actually of the 3 who allegedly made the offensive post on FB, only one can be identified as a blogger. And even he has made it quite clear in re-posting the picture on his FB that it was a 'repost' and was a 'flame-bait' by the actual person who posted it.

And when Mr Yaacob speaks of a 'code of conduct' for the internet, would this code be something like the Highway Code - which even if is called a code is actually law? If the Minister for Information, Communication and the Arts were to use these instances as an excuse to regulate the internet, it would be akin to using a sledgehammer to kill a fly.

And also as Mr Yaacob had rightly pointed out by saying,"The voices that came out from the Internet were not just Muslim voices, there were also non-Muslims that stepped forward and said 'this is not right. Let us do something about it'. Therefore it reflects the value that they place on the racial and religious harmony that we have in Singapore", there already exists a code of conduct (not legislated and yet effective) on the internet. So, why the need for a Code which may in fact be Law?

Can you really regulate the internet? If you do that, it will only further cast Singapore as an authoritarian State, less attractive to the investors from all over the world.