Political parties should engage on all platforms 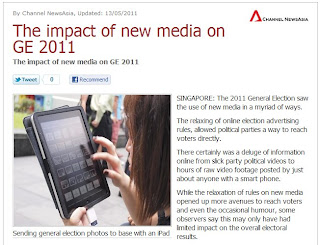 I was interviewed by Hoe Yeen Nie of Channel NewsAsia for her report on "The impact of new media on GE 2011".

At the interview, I said that if you go by what's reflected on the internet, you would think the opposition would win hands down. But that did not happen". I said that those that supported the opposition on the internet, either on their social media, websites, blogs or other mediums of communication,probably did vote for the opposition. But that the electorate is much bigger than those who went online to express their support to one Party or another. So, the Parties should discount the feedback of support they receive online by at least seven-tenths.

I also said that some Parties like the People's Action Party and the Workers' Party, were relatively conservative in their outreach over the new media and that Parties such as these could have done much better if they were better able to optimise the online tools.

CNA reported me saying, "Although it may seem like TOC is leaning towards one side, we have not supported any political party", but they omitted the part where I said that we work with whoever would respond to us (The Online Citizen). Because the opposition responded to us more often than the PAP, we reported the views and opinions of the opposition more than the PAP's.

I said to to Yeen Nie that it is important for political parties (including the PAP) to make use of all platforms that are available to engage the citizens. Even the platforms that seem to be critical and/or skeptical. You can win over the critiques and skeptics by sound debate. But if you do not engage, you make cynics out of them and it will then be impossible to win them over.
The Online Citizen