PAP candidate for Mountbatten thought Singaporeans were noise makers too 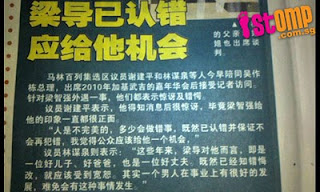 It certainly does not look like Senior Minister Goh Chok Tong's impression of Singaporeans as noise makers, is a one-off comment.  In August 2010, he exhorted Singaporeans not to drone on like vuvuzelas as well.

But is SM Goh the only one from his GRC who seem to think that Singaporeans are noise makers? In 2006, one of the MPs in SM Goh's very own Marine Parade GRC, Lim Biow Chuan said that 'Singapore is fast becoming a nation of complainers'.

I am not sure if Mr Lim's impression of Singaporeans as noise makers is something he caught from his mentor, SM Goh, but Mr Lim has now been announced to be the PAP's candidate for Mountbatten; and in the event where Mr Lim was announced as the candidate, he reportedly said that the electorate should judge him on the things he has done over the past five years.  And the electorate should judge him and judge him by first asking him if still thought that Singaporeans were noise makers.

It is also noteworthy that at the height of filmaker Jack Neo's sex affair with a model, Mr Lim showed support for Mr Neo saying, "since he is remorseful over this incident, he should be forgiven. Actually, a man who has a good career development would find such scenarios unavoidable". Mr Lim later claimed that he had been misquoted by the press.
Opinions