February 09, 2011
I want to write about a few good men, who I think will do good for Singapore if they are fielded as a candidates in this coming general election, get elected and come to represent the people of Singapore in parliament. 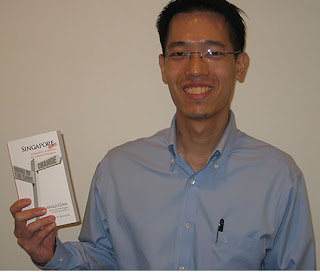 The first person that I want to write about is my friend Gerald Giam. I first met Gerald when he came to meet me with his friend about volunteering with the homeless in 2008. He seemed very sincere, focused and pragmatic. About a month later, I was introduced to him again by Andrew Loh (former Chief Editor of TOC) as being one of the editors of The Online Citizen.

Since then, I have got to know Gerald a little better. He is a committed family man, a devout Christian but most of all someone who truly cares about the future of this tiny nation we call Singapore, and wants to do his part in shaping a better Singapore.

I have worked with him on a few projects, including brainstorming sessions about how to assist the disadvantaged in a more coordinated and yet sustainable way. We called that project 'Way Forward Singapore'. In all the projects that I have worked with him, he struck me as an awesome team-player and an intelligent critique whose arguments are hard to rebut.

Knowing him, I think he is a reluctant leader, but will lead with resoluteness and steadfastness of mind if he had to. I am proud to call Gerald Giam a friend. I am sure that he will do Singapore proud - elected to parliament or not.

If you like me you want to support Gerald Giam, you may support him by buying his book Singapore version 2.0.
Opinions