Election in Burma a sham unless... 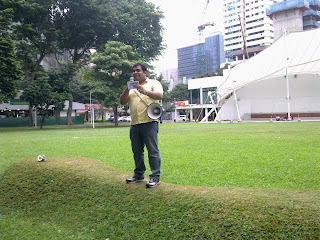 I organised the 'a vOte...bUt CHoice?' postcard campaign and demonstration at Speakers' Corner for MARUAH.

More than 25 people attended the demonstration at Speakers' Corner today.  The speakers, Braema Mathi, Siew Kum Hong, Choo Zheng Xi and Leong Sze Hian spoke at the demonstration (Seelan Palay could not speak at the event as he was unavailable).  I moderated the event.

The stand of MARUAH is closer to what the Indonesian Foreign Minister said, that there is a credibility deficit in the elections in Burma, but that it's not too late for the ruling junta in Burma to make the upcoming election in November more inclusive and participatory by freeing all political prisoners (including Aung San Suu Kyi), by allowing international observers from United Nations to watch over the elections process and by repealing all laws/regulations which interfere with free and fair elections.

That unless these conditions are met, the elections in Burma will be a sham. All the speakers emphasised this point.

MARUAH also used this campaign to urge the government of Singapore to support the call made by United Nations to establish a UN Commission of Inquiry into the international crimes in Burma.

It is still not too late for you to show your support and participate in this campaign.  The postcards can be downloaded and printed from HERE.

Through this campaign we the people of Singapore, may ensure that the upcoming election in Burma becomes a part (even if it is just a very tiny part) of the solution to the problems in Burma, and not create more troubles ahead.