Explanation from the National Library Board required please 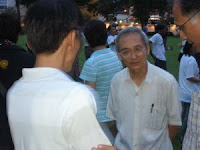 I wrote the following email to National Library Board today.

This matter represents the gradual closing of our society and the “silencing” of a man who continues to suffer the odium of being an ex-political detainee without trial, despite being freed for the last 20 years.

Would you please consider supporting the sentiments of my email? If you would, please feel free to use the email addresses found in my email above, to send a similar email to the Board members of the National Library Board (NLB) to request an explanation for the actions of the management of NLB.

Your act of emailing the Board of NLB, would be and act of citizen participation in the larger life of our nation.

More information about this incident can be found in Singapore Rebel.
social activist