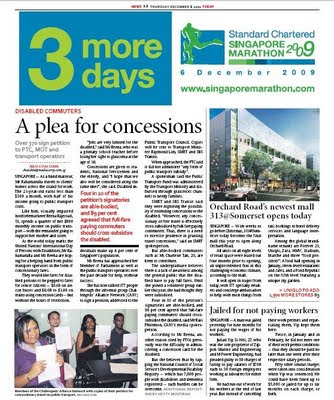 I was the media spokesperson for CAN!'s campaign for transport subsidy for people with disability.

CAN!'s petition signing and awareness raising campaign ended in May 2009. Since then, they have been trying to deliver the petition which was signed by 377 people. Both people who are able-bodied and people with disability.

They tried to deliver the petition through REACH after all they are supposed to be Reach everyone for Active Citizenry @ Home; and were to connect them to the relevant government agencies.

REACH however claimed that they did not receive the first email sent, asking them to connect CAN! with the Transport Ministry and then they replied to the second email, saying that they will try and make the second connection. Their subsequent email came about 2 weeks later (at the end of June 2009), asking CAN! to scan and send the petition to the Ministry of Transport.

But how can a poor, resource-less, informal group of people with disability like CAN!, scan a 25-page petition (with signatures) to the Transport Minister?

Then, the group got together and deliberated how else they could send the petition to the ministry. A few ideas were discussed. They even thought of meeting the Transport Minister through his Meet-the-People Session, but decided against it as they thought that it 'would not be the right thing to do'.

Finally in September, they wrote another email direct to the transport minister. The reply came about 14 days later, not from the Transport Minister, but from some official from the ministry asking CAN! to submit the petition to the public transport operators.

CAN! got together again. "But why should we submit the petition to the public transport operators?" they wondered. "They are responsible to their shareholders and not to the people who elected them - even the people with disability". 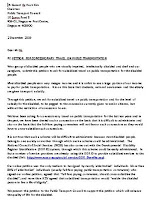 Finally, they decided to deliver an open petition to the Public Transport Council (PTC), copied to the Transport Ministry, and the public transport operators, through a press conference.

When the media tried to contact the PTC on this, they replied that they did not administer "any form of public transport subsidy".

So, the transport ministry washes their hands-off from the issue, the PTC says they don't know anything about it, which brings the people with disability back to being at the mercy of the public transport operators.

Would the people with disability have to wait for 10 more years, for the public transport operators to explore if they should be given a subsidy or not?
Musings social activist