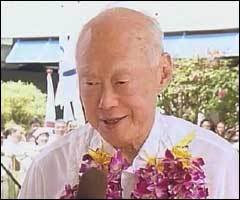 It is not only the opposition candidates who “talk a lot of things, which is rubbish”, but the Peoples’ Action Party’s (PAP) candidates too are guilty of being facetious. Blogger Gayle Goh wrote on her blog, i-speak, after listening to PAP candidate, Ms Penny Low, in a Pasir Ris-Punggol Group Representation Constituency (GRC) rally: “She is one scary woman! She kept yelling at the crowd anti-SDA things, trying to rouse them into some sort of fervor. ‘SDA people in their trucks go round and round and round! No direction! Round and round…What can they do for you?!’, etc… I am very scared of her now…I kept imagining her chasing after her kids with her rattan cane.” (Source: Institute of Policy Studies.)

Another blog, Singapore Election Watch, wrote of a PAP candidate who spoke at a rally describing the opposition parties as terrorists; they come and strike every five years and disappear. “In fact they hung their posters in the middle of the night”, the candidate supposedly said.

Of course, these were not reported in the local mainstream media.
The Online Citizen