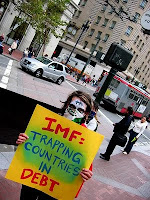 OVER ninety countries comprising more than half the world’s population have lived directly under International Monetary Fund (IMF) imposed conditions. In other words, the IMF has had a tremendous impact on billions of people around the world. But how well has the IMF performed in improving the lives of the people in these countries?

Founded at the end of World War II to promote global economic stability, the IMF keeps watch on the currency, trade and economic policies of its 184-member nations and makes nonbinding recommendations for improvement. The fund also provides low-cost loans to countries in financial need on the condition that borrowers undertake economic policy changes like adjusting their balance of payments or reducing inflation.

One might think that after the IMF is done with these countries, they would be less in debt than before the IMF got to them in the first place. It is disconcerting to learn, that in the seven years after the IMF sanctioned ‘stabilisation’ programme, Sudan’s debt increased from 2 billion US dollars to 13 billion US dollars. (See: The New Scientist: Third World Debt)

In other words Heavily Indebted Poor Countries (HIPC) countries like Sudan, after cutting all of their basic programs, were more in debt than when the IMF got to them in the first place. Does that sound like a successful loan program? It certainly does sounds like a successful loan-sharking program. (See: IMF and World Bank: Global Loan Sharks and the Media)

In 2008 the IMF was suddenly called back into action after years of declining relevance when financial crises began to swamp struggling countries. The fund brokered rescue packages for Pakistan, Iceland, Hungary and Ukraine; moves that thrust it into the thick of a global crisis after a frustrating period in which it was a bystander.

However, in keeping with its tradition, IMF continues to make crisis loans with heavy conditionality that may adversely affect HIPC. For example, its loan to Pakistan came with a condition to raise interest rates and electricity tariffs before the end of 2008. These conditions will have enormous financial and social consequences for the poor in Pakistan, and frighteningly exacerbate income disparity.

Of course the new IMF loan agreements have clauses about strengthening social safety nets and maintaining or increasing spending on social protection, which is an improvement from the way the IMF, approached social protection in the Asian financial crisis in the late 1990s. But as recessions in the borrowing countries deepen, meeting strict spending limits in IMF programmes may be difficult without cuts to public services and social protection.

Another controversy IMF courts are with its loans to Sri Lanka. IMF officials justify the loans by saying that Sri Lanka is facing a financial collapse because its reserves are totally drying up. That $3.5b which it had in reserves has depleted to nearly $1b; enough to cover a dangerously low 4-week period. But Tom Malinowski of Human Rights Watch, in urging Britain and the United States of America not to approve the loan says, “Sri Lanka is in a fiscal mess in good part because it massively overspent on this war”.

Despite opposition from several countries, including the United States of America, Britain, Germany, France and Argentina, IMF approved a massive US$2.6 billion loan to Sri Lanka in July 2009, saying that it has noted the human rights violations and to impose conditions on the improvement of human rights to the loan, is but a concern of the western nations.

In fact, IMF vehemently states that human rights advocates “should not expect the IMF to impose human rights conditions on its assistance to member countries”. What IMF has failed to realise is that human rights is not a just a concern of western nations, it a fundamental human norm, which cannot and should not be ignored by international financial institutions such as the IMF.

Singapore which has been a contributor to IMF’s loan programmes since 1998, quadrupling its lending to IMF recently to US$1.5. This credit by Singapore to IMF will go into a New Arrangement to Borrow Scheme (NAB) which deals with “situations that may threaten the stability of the global financial system”.

Hopefully countries like Pakistan will not become more indebted in a decade by participating in such programmes of IMF. Hopefully Singapore has not unwittingly become a ‘syndicate’ of global loan sharks like the IMF.
The Online Citizen