June 10, 2009
The Economist Intelligence Unit's Political Instability Index shows that the threat posed to the Singapore government by social protest has increased. The index scores were derived by combining measures of economic distress and underlying vulnerability to unrest. The index covers the period 2009/10, and scores are compared with results for 2007. 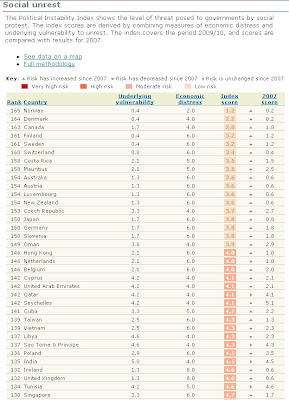 Singapore's risk has increased from 'low' to 'moderate' and Asian coutries like India, Vietnam, Taiwan and Hong Kong and Japan are deemed to be of lower risk of social unrest than Singapore.

With the exception of Vietnam, the other Asian countries which are deemed to be at lower risk of social unrest when compared to Singapore, all employ the multi-party political system.

Samuel Huntington the American political scientist and the author of the book, "Clash of Civilizations", argues that as societies modernize, they become more complex and disordered. If the process of social modernization that produces this disorder is not matched by a process of political and institutional modernization; a process which produces political institutions capable of managing the stress of modernisation, the result may be violence.

Alexis-Charles-Henri Clerel de Tocqueville a 19th century French political thinker and historian observed that "steadily increasing prosperity" does not tranquilize citizens; on the contrary, it promotes "a spirit of unrest".

Is the development of a multi-party political system, the answer that Singapore needs in managing the stress of modernisation and in lowering the risk of social unrest?
Musings