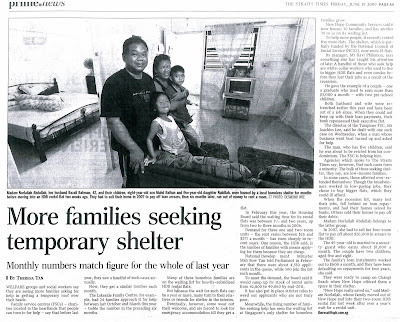 In her article "More families seeking temporary shelter", Theresa Tan says, "Mr. Ravi Philemon says something else caught his attention of late: A handful of those seeking help are white-collared workers who used to live in bigger HDB flats and even condos before they lost their jobs as a result of the recession. He gave the example of a couple - one a graduate who used to earn more than $3,000 a month - with two pre-school children. Both husband and wife were retrenched earlier this year and have been out of job since. When they could not keep up their loan payments, their bank repossessed their executive flat."
The Straits Times