Overcoming fear and misinformation - give us our dignity! 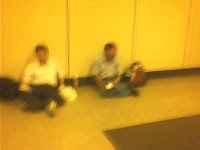 “We don’t want to sign the petition”, says John (not his real name). John and Ryan (not his real name either), are visually handicapped (blind) buskers. They try to sell tissue-papers to the passers-by at various Mass Rapid Transit (MRT) stations.

“We don’t earn much,” says John, “maybe about $15 or $20 every month”. “Of course there are a lot of people passing by, but they are blind to us or maybe we are invisible to them”, he adds.

However, the card is not a concession card but merely a form of identification, and the visually handicapped would have to pay full fares when the driver asks them to do so. Ryan, who says that he is aware of that, adds, “Our social worker has told us to just pay when the driver asks us to pay.”

John, who identified Reena, the Challenged Alliance Network! (CAN!) Coordinator, said, “We are glad that you are brave enough to fight for this. Although we (John and Ryan) will not sign the petition, we wish you all the best”.

Fear is a factor encountered by the team who are trying to garner support for the petition for public transport subsidy for the challenged people. “I have had people who have phoned me to demand that I drop this campaign because it is not supported by the associations. Yet others have said that they are afraid that they will be marked because this is anti-government or because we are fighting for our rights. It is one thing to fight for your rights and quite another to ask for your rights.”

Misinformation is another huge obstacle the team faces as they try to garner sufficient support. “I have had people who call me and tell me to drop the petition saying that anyways [sic] we get to ride for ‘free’ on the buses. And when I remind them we are actually at the ‘mercy of the drivers’ when we ride for free and that this does not apply when we take the train, because there is no driver to be at his mercy, the person said that handicapped people actually are discouraged from taking the train because it is not safe for them.”

Mr. Edmund Wan, the former Executive Director of Singapore Association for the Visually Handicapped who has lobbied for this cause, recommends a concessionary scheme because the majority of handicapped people fall into the lowest strata of earning power.

Reena notes the tremendous support the call for concessionary support for the disabled has gotten from the likes of Mr. Gerard Ee, the President of Public Transport Council, Judy Wee the secretary of Singapore Disabled People’s Association and Nancy Chia, the head of Handicaps Welfare Association, who reportedly said in the Straits Times article : “If the elderly, school children and NSmen can have concession, why not the handicapped? They are generally lower-income people who rely on public transport”.

But Reena has some pertinent questions for the transport providers:

1. Although she welcomes SBS Transit’s statement that they are looking into offering concession fares to commuters with physical disabilities, why is it that subsidy is only being considered for the physically disabled and not all the disabled?

2. Why the need for staggering the concession, first to buses and only at a later stage to trains?

3. Why is SMRT a major public transport operator in Singapore silent on this topic?

Reena who has been asking for concessionary public transportation for the disabled for the last ten years says, “We are not asking for a free ride. Give us our dignity!”

Support the disabled people in their call for Concessionary Public Transportation for the Disabled.

Anonymous said…
Very thoughtfull post on overcoming fear .It should be very much helpfull.