The Myth of the Violent Singaporean Protestor 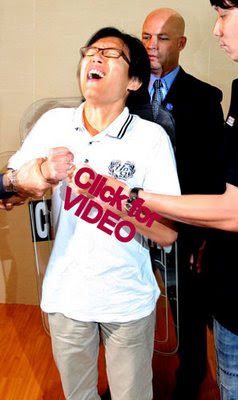 In the ISD Intelligence Service Promotion Ceremony on 15 April 2009, Deputy Prime Minister and Home Minister, Mr. Wong Kan Seng said that they would implement the recently passed Public Order Act "firmly" to deal with those "intent on disrupting public order".

But what does he mean by disruption of "public order"? Prior to asserting that they will deal firmly, Mr. Wong paints a picture of public disruption when he said, "We have just seen the G20 protests in London. Thousands of protestors had taken to the streets, with the more violent among them damaging public property and business premises. In Thailand over the last one year, thousands of protestors have caused grave damage not just to physical property, but to livelihoods and the economy of the country as tourists are staying away. We have also seen on television street battles between protestors and authorities, causing injuries to many people and some have died as a result. I do not believe that Singaporeans would want such violence to happen here, and with what we have seen time and again in other countries, it would be naive of us to believe that nothing untoward will happen during street demonstrations".

When the Minister said, "In Singapore, it is only a tiny group of irresponsible and selfish individuals who have been pushing this line of civil disobedience. They do not care for the interests and safety of other Singaporeans; they are only interested in themselves", he tried to draw a parallel between the violent protestors of the United Kingdom and Thailand, to the peaceful protestors in Singapore like Seelan Palay, Shafiie Syahmi and the likes. This is highly misleading and regrettable.

Would the Singapore Police Force now acquire (or have they already acquired) 'non-lethal' devices like the stun shield to counter such protestors of civil disobedience? At the Trussco's exhibition of 'restraining devices' held on the same day as the ISD Intelligence Service Promotion Ceremony, Trussco's CEO, Mrs. Tina Wong said that the Singapore Police Force were "a major end user" of the Taser technology.

Amnesty International in providing a sample of manufacturers of exporters of 'non-lethal' devices, which could be used for torture as well, notes that Defenders Network a company based in Alabama, USA, had sold restraining devices such as Electrified High-Voltage Anti-Riot Shields which could emit up to up to 150,000 volts, to Singapore (among other coutries), because as Defenders Network claims, it can "maintain peace and order without drawing blood or endangering lives".

But are such devices really 'non-lethal' and do they not 'endanger lives'? The use of stun shield has resulted in at least one "unnecessary use of force" death in the USA prison systems. And also, there is the tragedy of Harry Landis, the Texas Corrections Officer. On December 1 1995, as part of the training to use such an electric shield, Landis was required to endure two 45,000-volt shocks. Shortly after the second shock, Landis collapsed and died. An inquiry later revealed that "the electric shock threw his heart into a different rhythmic beat, causing him to pass away".

The ability to burst the trigger and send at least 50,000 volts of electricity, which stuns or causes the death of a protestor, even in the pretext of maintaining "public order", is too much of a responsibility to be given to the police; especially based on a mere hypothesis, when there is no recent history of violent protestors in Singapore.