How will they respond? 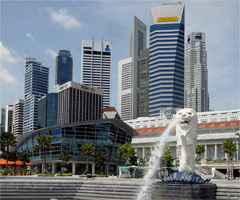 Although there was mounting concern that banking secrecy in tax havens has helped to worsen the economic crisis by disguising the true value of some global assets, plans to name and shame international tax havens ended in a diplomatic fudge. Group of 20 countries leaders agreed to publish a blacklist of countries refusing to sign up to financial anti-secrecy rules but after frantic negotiations only four were included – none of them regarded as major tax shelters. The rest of the 'tax havens' came under another list - The Grey List.

Singapore is included in this 'grey list' countries which includes traditional tax havens – such as Monaco and Gibraltar – which have signed up to, but not implemented, key standards of tax and banking openness. World Leaders agreed that even those on the 'grey list' would face ‘sanctions’ if they refused to comply with regulations being drawn up. The punishments would include cutting aid and increasing costs for those who bank in them.

The international standard for information exchange and reflected in the UN Model Tax Convention was endorsed by the Group of 20 countries in 2004. But some countries fearing a crackdown on tax evaders stashing their money abroad, only committed to the internationally agreed tax standards weeks before the Group of 20 summit. Matti Kohonen of the London-based Tax Justice Network, which campaigns against tax loopholes for rich individuals and corporations, noted that in the two weeks leading up to the G-20 meeting in London a number of tax havens signed up to new banking agreements in hopes of avoiding being listed as uncooperative.

What would be even more interesting to note would be how the government of Singapore responds to being placed in the 'grey list'? Is it going to criticise the way the lists were drawn up, sulking perhaps that several US states with tax-friendly laws, like Delaware, Nevada and Wyoming, were not put on either list while Singapore was. Or is it going to respond like Monaco, whose Minister of State (equivalent of Prime Minister of the principality) Jean-Paul Proust said, "We are on the right track. We hope to be able to definitively leave the grey list towards the end of the year"?
Economic Crisis Economy