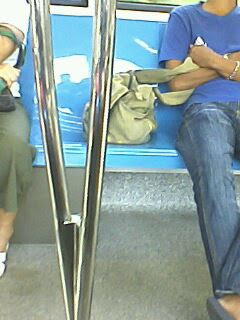 A young man was sitting opposite me today in the MRT. The young man had placed his bag on the seat next to his; and it was alright in the beginning as there were hardly anyone in the train. But the train started filling up soon enough and before time, people were starting to stand in the train. But still, this young man had not removed his bag from the other seat. I was of course very irritated by this. I wanted to ask this young man to remove his bag from the empty seat so that other passengers could sit; but I thought, “let's observe if anyone would exercise his or her right as a passenger in the train”. More and more people started boarding the train, but no one was bold enough to ask this guy to remove his bag. They would stand at a distance and give him a stare; a stare that did not seem to bother the chap.

As my station began approaching, I decided that I had seen enough and that I would say my piece to the young man to be more considerate. But as I was just about to get up, I noticed a young lady, who had just boarded the train at the station before, going next to the young man and standing dangerously close to the seat with the bag; indicating through her body language that she wanted to sit. The young man tried ignoring her for a while; but after a while he had to give in to her persistence and give up the seat he was hogging with his bag.

Of course, I was highly impressed with this young lady. Her act also got me thinking. Perhaps, people need not even speak to exert their right. They say, “action speaks louder than words”. No amount of staring from afar is going to change anything; but maybe, we could also exert our right by being consistently persistent.
Bloggers Musings

Kaffein said…
Actually what you should do is say this:

1. Make an intention you want to sit.

2. If he looks at you, ask:
Excuse me, can I see your ticket? Did you pay for a one-person fare or for two persons? If not, then you don't have a right to take two seats.

And people around laughed at him.

B said…
Am surprised that no one felt comfortable to just smile at the guy and say "excuse me" and if he didn't do anything add, "could you move your bag please?" and say "thanks" nicely when he does. That's what I would do in that situation anyway; not sure if it's a cultural thing, in Singapore that you'd feel awkward about. [I live in New Zealand.]
May 8, 2009 at 3:38 PM