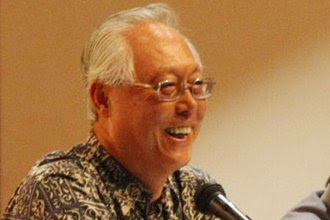 Perhaps I was wrong when in my earlier post, I had said that the PAP "doesn't recruit from schools". The Marine Parade Leadership Foundation Programme, the brainchild of Senior Minister Goh Chok Tong, which is a scheme with a year-long programme targetted at post-secondary youth aged 17 to 25 to pick up leadership skills was launched today.

Mr. Goh said that the purpose of the progarmme was to "try and identify student leaders and get them to think beyond themselves and beyond their school. And then we hope to nurture them, to enhance their skills and interest them later on when they leave to also do something beyond themselves for the community. It is, in fact, about leadership in general for the whole country." He said the programme would also target neighbourhood school students and that perhaps although these students may not be able to compete for national leadership awards and scholarships, they can become majors, captains and warrant officers who form an important middle tier of leaders.

Almost as an answer to these remarks by Mr. Goh, during a dialogue with the students at the launch, one polytechnic student made an emotionally charged comment. He said, "For me, I only became outspoken when I came to poly because I am among my peers and my peers don't look down on me..." This comment tugged at the very root of the frustration of many; whether less academically gifted students would be discriminated against in this quest for leaders. To this comment by the student, Mr. Goh replied, "No, we don't look down...don't worry. As I mentioned just now, this programme is aimed at leadership qualities - academic results are second priority."

Over the decades, the entrenched discourse of meritocracy has focused attention mostly on the PAP leaders academic qualifications and techno-administrative abilities, loosing sight of their people skills, passion and compassion. But these are important qualities that the 'lesser mortals' continue to look out for when forming their opinions about their leaders.

Was Mr. Goh's reply to the student a mere attempt to manage the public image of the governing party?
Bloggers