Leave the world a little better 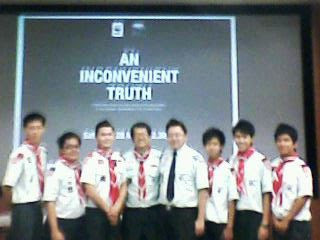 “Not even all scouts in Singapore know about Earth Hour”, admits Mr. Muhammad Khair Bin Samil’an, the National Rover Scout Programme Commissioner. “So, how can we expect most of the public to know about Earth Hour? That was why we came out with the novel idea of organising a series of road shows to educate the general public”, he adds.

The Singapore Scout Association (SSA)has been in the forefront of being the key supporting partner of Earth Hour Singapore. Earth Hour, an initiative of the World Wildlife Fund (WWF), is an event started in Sydney two years ago by environmentalists keen to cut energy use and reduce greenhouse gas emissions. Earth Hour 2009 is hyped as “being taken to the next level, with the goal of 1 billion people switching off their lights as part of a global vote…”

When asked how The SSA became a supporting partner of Earth Hour, Mr. Tan Sijie, the Project Coordinator of the Earth Hour, says that The World Organisation of the Scout Movement (WOSM) has long collaborated with the WWF. He further added, “This could be attributed to the fine efforts of the Youth delegation representing the Singapore Scout Association (SSA) at the 10th World Scout Youth Forum in Korea, July 2008. The delegation pressed on with the initiative at the forum and it eventually garnered 141 signatures from Scouts across some 97 countries. Finally, it was accepted as a recommendation by the World Scout Committee.”

Mr. Tan firmly believes in the ethos of the founder of the Scouts movement, Lord Baden Powell: “Leave the world a little better than when you found it”. The Korean Scouts Forum and their Singapore counterparts, working together, convinced various other scouts movements from around the world about the importance of adopting Earth Hour as a worldwide scouts initiative. Inspired by Mr. Tan’s determination, scouts from up to 160 countries would have observed Earth Hour on 28 March 2009.

“The young are vitally concerned with the future and many are well aware that climate change is the greatest threat to the planet’s future,”said Mr. James Leape, Director General of WWF, in a joint statement with Luc Panissod, the Acting Secretary General of the WOSM. “We are delighted that the scouts are again working with us to secure the environment for generations to come.”

Mr. Caleb Cheah, Director (Corporate Affairs) of SSA, says that with the support of corporate partners like Capitaland, the scouts have been very successful in organising and staging a series roadshows in the Central Business District to raise awareness of Earth Hour. “The SSA is a channel which translates the message of Earth Hour to the larger community”, he explained. The mobilisation of the entire scouts movement in Singapore is indeed a nationwide grassroots efforts, he said.

Mr. Muhammad Khair says that while it is true that corporations and executives have been targeted more than the general public by the efforts of SSA’s roadshows, he believes that there will be a “trickle down effect” to the general population eventually, which will impact and influence behavioural changes. “There will not be just one earth hour; but there will be many ‘mini earth hours’ as a result”, he believes.

Of course Earth Hour has all the trappings of being just an empty symbolism. But such symbolism may be useful in showing that there is a strong global mandate for tough global action on climate change. This assumed global mandate could be very useful when the United Nation convenes a conference in the Danish capital later this year to attempt to craft a new global warming treaty for the period after 2012, when the Kyoto Protocol’s obligations to cut carbon emissions expire.

“We can only protect what we know,” said Mr Tan Sijie. And even if it is only mere ‘hype’, SSA has played its part in helping the various communities in Singapore ‘know’ the urgent need for a comprehensive solution for the global climate change problem, by being the key supporting partner of Earth Hour.
Bloggers The Online Citizen