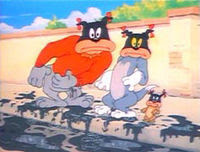 The study team led by Mr. Lim Swee Say upon returning from Europe in 2007, created the Skills Redevelopment Programme to pre-empt structural unemployment and to provide those at risk with training to upgrade themselves, better equip themselves for higher-value jobs. Mr. John De Payva speaking at the Singapore Manual Mercentile Workers' Union Delegates Conference on 12 April 2007, commented on these initiatives to upskill and re-skill workers and said, "Our vision was for every worker to possess better skills so that he could do a better job, enjoy better pay and enjoy better life."

In an impromptu speech at the parliamentary sitting to debate the Singapore Budget 2009, Mr. Lim Swee Say told a tale of a kingdom of mice. He said the mice in the kingdom 'lived very peacefully' until a cat appeared. The mice Parliament convened to discuss how to overcome their new fear.

One mice MP proposed a very simple solution: hang a big bell on the cat's neck so that it can be heard wherever it goes. Another suggested that it be big and heavy 'so that by the time the cat sees us, it will be so heavy, it cannot keep up with us'.

But there was a snag in implementing it. Who will bell the cat? 'There was no volunteer,' said Mr Lim. The idea failed and the cat continued to move around freely while the mice lived in fear.

One day, a mother mouse and her baby were hunting for food when the cat cornered them.
Trapped, the mother did the unexpected: she stared at the cat and barked, sending the feline fleeing.

To laughter from the MPs, Mr Lim said: 'The mother mouse turned and told the baby mouse: 'See, now you understand the importance of upskilling and re-skilling'.'

Now, who has ever heard a mouse bark like a dog? Is that how improbable it is for a upskilled and re-skilled worker to enjoy better pay and better quality of life?