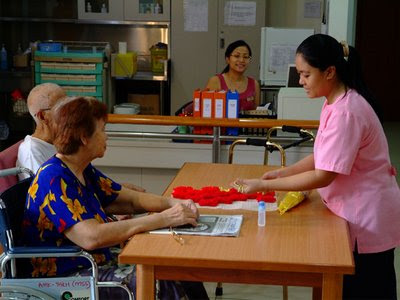 Singapore continues to spend less than 4% of its annual GDP on healthcare. This is unrealistic. Even the Health Minister admits as much. Speaking at a dialogue session organized by the Singapore Health Services on 10 September 2008, the Health Minister implies that the health spending needs to go up but should be “kept below 10% of GDP”.
The Budget allocated 3,705 million to the Health Ministry this year. The Ministry of Health has identified the following desired health outcomes in line with their mission:

In outlining the initiatives in line with these mission statements, the Ministry besides highlighting Eldercare, fails to address the issue of the aging population adequately in this budget.

The population of Singapore is aging rapidly. The proportion of population who are 60 years old and older has risen from 4.1% in 1961 to 11% in 2001; and is expected to reach 27% in 2030. The elderly people in a country spend more on medical care than the young, and it is therefore, intuitively correct to assume that the aggregate healthcare rises with higher percentage of elderly population in Singapore.

One of the five components in the 20.5 Billion ‘Resilience Package’ unveiled in Budget 2009, states “building a home for the future. We will spend $4.4 billion on developing first class infrastructure for the island and on expanded provisions for education and healthcare.”

“Building a future…building first class infrastructure…for healthcare.” No doubt is a noble statement. But after the Finance Minister have made this statement, the Health Minister makes a suggestion that Singaporeans might want to consider staying at a nursing home across the causeway in Johor where it is much cheaper. Then he goes on to qualify his suggestion by saying how much cheaper the nursing homes are in JB and also by justifying that “a significant number visit only during the weekends, so what is the difference in putting them in Johor Baru?”

When he realised that this was a suggestion that would not go down well with many people, he tried to point out that this was only an option that he wanted to highlight; and that it was not an option for the poor, who are heavily subsidized but for the middle-income families, who may need to pay more for the care themselves. He said that this was part of globalization and compares it with Singaporeans going to Bangkok for Lasik treatment and with Americans and Russians coming here for treatment.

How different is short-term treatments like lasik and longer term treatment and care provided by Nursing Homes? Has the Minister tried to cross the causeway to JB on weekends? Is this a true option for the middle-incomed or another added burden for them?

Was this merely a suggestion? In 2006 in an interview with Mediacorp’s Channel 8 the same Minister said, ““My personal view is, our land is expensive. But we have nearby neighbours in Johor, Batam and Bintan. The elderly want to reach their doctors within half to one hour. So retirement villages in neighbouring countries is possible…”

Even if it was a mere suggestion should the Minister have even alluded to such an ‘option’ in parliament, when he knew that a similar suggestion made in 2006 created so much misunderstanding and accusation at the same Minister; when entitlement of healthcare is one of the basic rights of every citizen, and even mentioning it as an option may imply that Singaporeans are only as good as they could contribute to the economy; who could be discarded once they are old or cannot contribute to the ‘grow at all cost’ economy?

The Health Minister said in his dialogue with the Singapore Health Services if the Healthcare spending were to go up and be capped to 10% of the GDP, then it would mean that an individual would need to use 15 percent of his own income on medical expenses, including health insurance premiums and co-payments. Besides medical advances making treatments and drugs costlier, the government policy of capping the medical intakes at local universities has contributed to the escalating healthcare costs in Singapore.

The government should refrain from setting a quota for the local universities for their medical intakes. This quota system has not only contributed to the escalating healthcare costs, but it has also discriminated the women who are assigned only a maximum of 41% of the available medical seats in the local universities. Is meritocracy only given lip-service to; when it comes to medical seat allocation in Singapore?

Studies shows that two-thirds of seniors over the age of 65, who receive long-term care rely exclusively on family, friends and other informal caregivers for helps including everything from shopping, to cleaning to taking medication, to getting to doctors’ appointments and even financial helps. A proper alternative and a true option especially for the middle-incomed, would have made the following suggestion in reducing individual healthcare expenditure, especially in eldercare:

1. Remove the Domestic Foreign Worker levy for qualified foreign workers who are brought in to care for the elderly, so that the elderly could be provided appropriate care at home (where possible) without the need step-down care at nursing home.

2. Provide Elder Care Tax Credit for qualified elder care expenses. As caregivers make heavy financial sacrifices in spending a large amount of money each year on expenses for aging relatives, including cost of providing food and transportation and paying for medical expenses, such a tax credit would be an added incentive and encouragement for caregivers to provide appropriate care for the elderly in their own homes.

3. Create a Programme and Registry of Certified Geriatric Caregivers. There is a need to create a programme to train Certified Geriatric Caregivers, who are not full-fledged nurses, as there is no need for all the caregivers for the elderly to be registered nurses. Creating such a programme and a registry for properly certified and licensed caregivers, will ensure the availability of qualified caregivers for the elderly and it will also reduce the high manpower costs involved with hiring registered nurses.

4. Create Retirement Communities which is a community-based model for aging in place which experts say is an alternative to nursing homes and assisted living centers run by large service providers. Such a community of subscribed members, allows the elderly to stay in their own community as they age, by organizing and delivering programs and services that allow them to lead safe, healthy productive lives in their own homes. Beacon Hill Village of Boston, USA is a good model to study and adopt in creating such retirement communities.

Such alternatives in healthcare, especially in aging and eldercare would make significant difference in a graying society like Singapore. Such initiatives would promote successful aging as well as be pioneer new approaches to aging and eldercare throughout Singapore.
Budget 2009 Economic Crisis Economy Khaw Boon Wan