"Tan Cheng Bock says that Lee Kuan Yew invited him to join the PAP. Ouch! He omits to say that I put his name up to LKY. Surely I deserve some credit — or rather, blame — for who he has become now? “For Country, For People”. He has conveniently left out “For Me”!

Tan Cheng Bock was my classmate in Raffles Institution. I have known him close for over 60 years. It saddens me to see how he has “lost his way”. He is like Don Quixote tilting at windmills."

To me, it seems quite unclear if when Mr Goh said, '"For Me"!', if he was referring to Dr Tan or to himself. Mr Goh seems to be pretty hurt that Dr Tan has left him out in his Progress Singapore Party Launch speech.

It is a known fact that Dr Tan and Mr Goh were classmates. Well, in fact, Mr Goh himself mentioned this at the Ayer Rajah Constituency's 25th anniversary celebration dinner in 2005:


"Tan Cheng Bock has been the MP for Ayer Rajah since the constituency was formed 25 years ago.  I have known him longer than this, in fact, for half a century.  We were classmates in RI.  I recommended him to the PAP.  He was then a doctor running his clinic at Ama Keng.

He passed the rigorous selection process and stood as PAP's candidate in 1980.  He won decisively.  Cheng Bock works hard and is not afraid to speak his mind in and outside Parliament.  He speaks with passion.  He has substance. In Hokkien, we say "wu liao".

Cheng Bock is also compassionate.  He cares for his constituents, and will go out of his way to help those who need help.  I was told that even at his clinic, he would frequently waive his medical consultation fees for patients who were genuinely poor and unable to pay.  That is why he received such strong support in election after election."

I see no need for Dr Tan to mention that he was introduced to the Party leaders by Mr Goh, when he got into the PAP, and finally to represent Ayer Rajah constituency, after being put through a "rigorous selection process" - or in other words through 'his own merits'.

After stepping down as the MP for Ayer Rajah, Dr Tan has kept himself relevant to Singaporeans by participating in the 2011 Presidential Election - and now by starting the Progress Singapore Party, to galvanise the alternative parties in Singapore.

I am not sure if Mr Goh is hurt because Dr Tan (his classmate) is still relevant to Singaporeans, while he is riding off into the sunset. While Mr Goh has maintained that he is too busy to retire from active politics and seems to be fighting to be fielded in Marine Parade again, there are rumours that he will be retired at the next General Election. 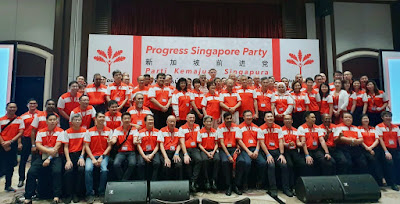 I am not sure who is jousting at imaginary enemies - Mr Goh or Dr Tan.

Dr Tan has recognised that from the lack of proper job opportunities for Singaporeans, to the nonavailability of transparency and accountability, the current PAP has become the real enemy of many Singaporeans.

Mr Goh on the other hand, imagines Dr Tan to be his enemy.

--
DISCLAIMER: I am a member of the Progress Singapore Party